Plant a Tree, Save on Energy

A well placed tree, shrub or vine can help reduce your energy bill, its true! 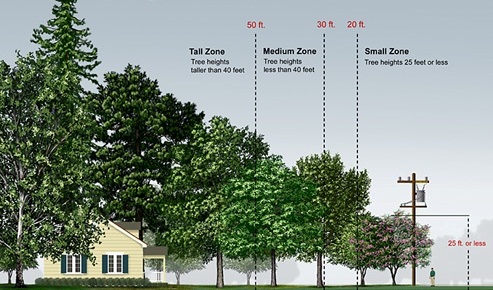 How so? It’s simple, in winter deciduous trees and shrubs maximize solar heating while blocking cold winds from hitting your home, while in summer they provide shade and vent breezes toward your home.
You want to plant short or low branched deciduous trees on west and southwest exposures of your house to block the strong low angles of afternoon sun such as Lagerstroemia indica with a multi-trunk (Crape Myrtles),  Prunus cerasifera ‘ Krauter Vesuvius’ (Purple Flowering Plum) or Cercis occidentalis (Western Redbud).
Large deciduous trees with high spreading crowns are best placed to the south where the sun is the highest and most intense during midday such as Pyrus calleryana ‘Bradford’ (Callery Pear) or Quercus rubra (Red Oak). You can additionally shade walls by planting climbing vines. Deciduous vines are recommended for south-facing walls and evergreen vines everywhere else.
Plants create micro climates through evapotranspiration a process were water is absorbed from the ground and released through a plants leaves as vapor, so the more you have around your house the cooler you will be during hot summers and you’ll also be breathing healthier air!